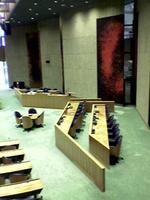 Today I paid a very special visit: I went to the Dutch Houses of Parliament and got a backstage tour! A dear friend of mine works on the staff of the Houses of Parliament and he invited me a long time ago to come along and he’d show me everything. Well, today was the day and he did indeed show me everything! We went to the dutch equivalent of the House of Commons (see picture), the House of Lords, had lunch in the restaurant (where I spotted two high profile Dutch MP’s who were apparently not on their summer break) and I saw the MP’s offices, the old room the House of Commons was housed in, the fabulous office my friend’s got looking out over the Binnenhof, the official ‘salons’ that are hundreds of years old and in which official receptions are held, and it was all fab! Normally the public is allowed access to the House of Commons public area (from where this picture was taken) but not in the other parts of the building I got to see today. It was interesting to see all these places you’d normally only see on the news in real life. And it was interesting AND sobering to hear about the realities of life at Parliament. Of course MP’s are only human and some of them are, well, ehm, very human.
I’ve promised my friend that when he comes to visit me in London, we’ll visit the British Houses of Parliament together, let’s see how they stack up to the Dutch ones!

PS If you want to see what I saw today, have a look at this virtual tour of the buildings.