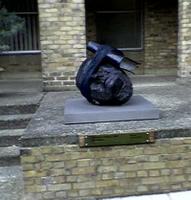 You know when some things aren’t real till they’re real…. does that sound fluffy? Sorry for that, but that’s the best way to describe what it feels like right now. This is all of a sudden very real. This MBA-thing.
I’ve Euro-starred in succesfully this afternoon, arriving all relaxed at LBS. I took the taxi over from Waterloo Station (no way I was lugging the amount of luggage over on public transport), and the cabbie was very nice (in fact, most of the London cabbies I’ve met are really nice). Interesting facts I learned from him: some cabbies can make up to 85,000 GBP per year before tax… and he reckoned the number of tourists had gone down 50% since the bombings in July. Plus a good tip on food: go where the cabbies go, it’s cheap and usually fairly good, with a recommendation for the best fish and chips joint in London.
I got my swipe-card/identification pass which has a picture of me looking like a rabbit caught in headlights on it. And I got a sim-card which I stuck into an old mobile phone, so I’ve got an English mobile number. Went to dinner with classmates I met at the Open Weekend and then onto the daily pubnights the incoming students are organizing for the flathunt. But now I’m knackered… I need a good night’s sleep.
I want to share this blog which I found, which is from a writer and dare I say it, inspirational speaker, seeking to integrate buddha in the workplace. Some of the stuff he has to say is pretty sensible.
PS The pic attached is of a statue in the quad of LBS.