Blogger’s been a bit wobbly lately, something to do with a wonky server. Please accept my apologies if you’ve been trying to read the blog but couldn’t because of these problems. One of the issues that doesn’t seem to be solved yet is the upload of pictures, so they’ll have to wait for a bit til they get that up and running again. 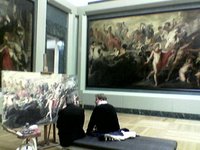 I’m writing this blogpost from Paris, woohoo! I’m here for a week, rented an apartment near the Centre Pompidou and I’m having a blast. Today I walked to the Louvre, for which a friend very kindly gave me two free tickets (which means I’ll get to go again later on this week, yippie!) and it was fabulous, what a great museum. I think I must have been one of the few tourists that didn’t head over to see the Mona Lisa first stop, my big love is Rubens, so I went to see his paintings (see left for a picture). Wow. I was so impressed and awestruck. Next stop were the Napoleon III Apartments, which give the words opulence and decadence a whole new meaning. Last stop within the Louvre was an expedition to find Zurbaran’s pictures, but I couldn’t find them on display, and I lingered a while in the Italian painting section, where I inadvertedly caught a glimpse of the Mona Lisa. 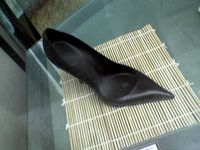 I’ve done some great food shopping (including a chocolate lollipop from Jean Paul Hevin)(the pump on the left is also one of his chocolate creations, for 45 euros it could be yours), and I think I’m falling in love with this city

Don’t get me wrong, London is still my number two (my hometown will always be no 1), but Paris is making a good third. There’s something about the way Parisians park (bump the car behind you, bump the car in front, et voila, there’s a parking space where there wasn’t one before!), the way Parisian women smoke (so elegantly, makes me almost jealous I don’t smoke) and the lovely architecture of cream coloured buildings and churches.

Pictures to follow when Blogger gets its act together again.
[edit 1. Blogger lets me put up pictures, so I’ve added a few. All of them are made on my mobile phone so I apologize for the poor quality.]